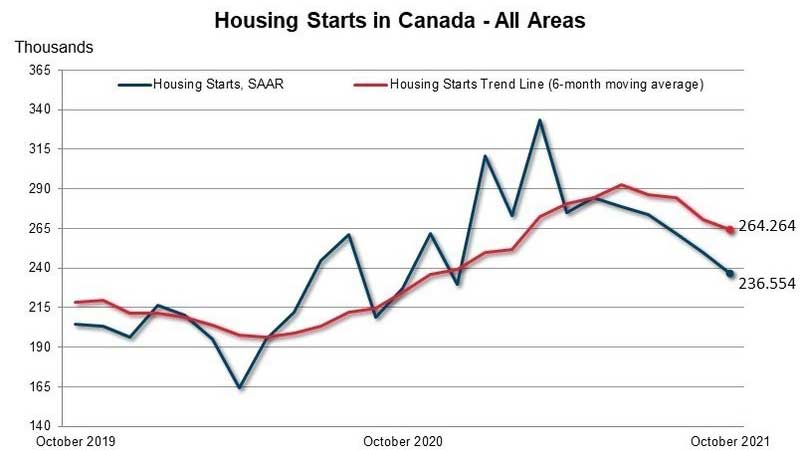 The trend in housing starts was 264,264 units in October, down from 270,661 units in September, according to Canada Mortgage and Housing Corporation (CMHC). This trend measure is a six-month moving average of the monthly seasonally adjusted annual rates (SAAR) of housing starts.

"The six-month trend in housing starts declined from September to October, as the retreat in total starts from their earlier 2021 levels continued," said Bob Dugan, CMHC's chief economist. "For SAAR housing starts in Canada's urban areas, a slight increase in single-detached starts didn't offset a larger decrease in multi-family starts in October and led to a decline in overall starts for the month. On a trend and monthly SAAR basis, however, the level of housing starts activity in Canada remains high in historical terms. Among Vancouver, Toronto and Montreal, Vancouver was the only market to register growth in total SAAR starts in October, due to a rebound from the prior month in the multi-family segment."

CMHC uses the trend measure as a complement to the monthly SAAR of housing starts to account for considerable swings in monthly estimates and obtain a more complete picture of Canada's housing market. In some situations, analyzing only SAAR data can be misleading, as the multi-unit segment largely drives the market and can vary significantly from one month to the next.

Rural starts were estimated at a seasonally adjusted annual rate of 21,757 units.

Monthly Housing Starts and Other Construction Data are accessible in English and French on our website and the CMHC Housing Market Information Portal. Housing starts data is available on the eleventh business day each month. We will release the November data on December 15 at 8:15 AM ET.

As Canada's authority on housing, CMHC contributes to the stability of the housing market and financial system, provides support for Canadians in housing need, and offers objective housing research and information to Canadian governments, consumers and the housing industry.