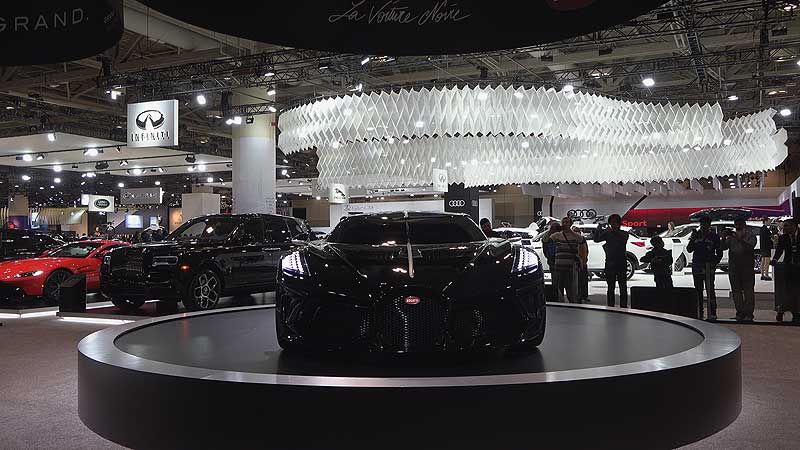 - The La Voiture Noire to debut at the Canadian International AutoShow. -

Elegant and powerful, the latest hyper sports car from French automaker Bugatti will make its Canadian debut at the 2020 Canadian International AutoShow.

La Voiture Noire will be brought to the AutoShow by Bugatti Toronto and Grand Touring Automobiles, one of North America’s most successful retailers of super premium vehicles.

At its heart, the Bugatti La Voiture Noire is a modern re-interpretation of the classic Type 57 SC Atlantic. But it is so much more than its ancestor (which, incidentally, was reaching speeds of 220 kilometres per hour 80 years ago). La Voiture Noire is powered by an iconic 16-cylinder engine that is unparalleled in the automotive industry, which pumps out 1,500 horsepower.

“Toronto has quickly gained a reputation as a supercar mecca, and the Canadian International AutoShow is reflective of its host city by bringing some of the most unique and iconic hypercars from around the world to the Show,” says Jason Campbell, General Manager of the AutoShow. “The Bugatti La Voiture Noire is one of the highest profile entrants in this sector, and one of the most beautiful and powerful cars we have ever been able to showcase.”

Bugatti’s La Voiture Noire (quite literally, “The Black Car”) is the most expensive new car of all-time. This special one-of-a-kind model sold to a Bugatti enthusiast for 11 million euros before taxes, equivalent to more than $16.1 million Canadian.

“La Voiture Noire is on the cutting edge of hypercars,” says Paul Cummings, CEO of Grand Touring Automobiles. “It is powerful. It is luxurious. It is technologically advanced. The lines are clean, the car sleek and it is fast. There is 110 years of Bugatti automaking experience in this car, and it shows.”

Grand Touring Automobiles has more than doubled its footprint within the Autoshow for 2020. They have invested in a significantly enhanced display, taking a major presence on the 800 level of the South Building in the Metro Toronto Convention Centre, where its six major super premium brands will now be showcased.

Grand Touring Automobiles’ expanded presence at the AutoShow is reflective of its major and most recent investment in a new state-of-the-art showroom facility just off the Don Valley Parkway, which is now home base to one of North America’s largest retailers of super premium automobiles.