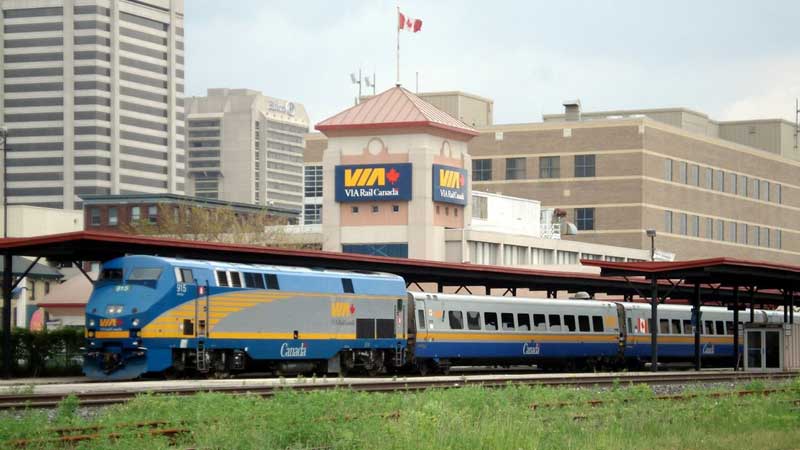 VIA workers hold national protest to keep jobs in Canada

(Montreal, December 12, 2018) - Today Unifor members who work for VIA Rail Canada will send a strong message to their employer and the federal government at train stations across Canada.

"This crown corporation should be creating good Canadian jobs and building a national rail service that we can all be proud of, not contracting out work to foreign multinational corporations," said Jerry Dias, Unifor National President.

The workers will be handing out leaflets in protest of VIA's recent announcement that it's cutting jobs and contracting out work to foreign companies. Taxpayers are being urged to contact their MP's and Transport Minister Marc Garneau to demand VIA work stays in Canada.

VIA Rail Canada is a Federal Crown Corporation that receives most of its funding from Canadian Taxpayers. VIA recently announced it is cutting hundreds of Canadian jobs and will contract that work out to an American company called Aramark. Additionally, Siemens, a German company, appears to be the top pick for the upcoming fleet renewal project, even though it has no vested interest in Canada. Aramark and its subsidiaries earned worldwide sales in excess of $19 million in 2017 while Siemens and its subsidiaries earned nearly $30 billion in 2017.

Unifor is also calling for a national transportation strategy with supporting legislation for VIA to promote a safe, affordable, accessible and environmentally friendly transportation system from the Maritimes to the Corridor, including South Western Ontario, and the Western Prairies, all the way to British Columbia.