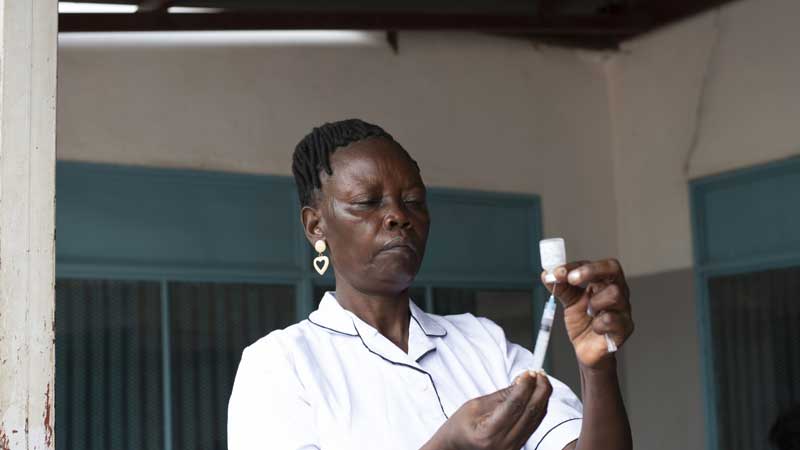 COVID-19 KPMG: Nearly half of Canadians don't think it is safe to take the COVID-19 vaccin

- A survey of 2,002 Canadians in the last five days reveals the vast majority want a made-in-Canada solution. -

Amid the initial rollout of COVID-19 vaccines, eight in 10 Canadians would line up for a shot within the next three months if it were offered to them, but nearly half question its safety, highlighting the need to bolster public trust and confidence, finds a new survey of 2,002 Canadians by KPMG in Canada.

"With half of the population in Canada looking for assurances on the safety and rollout of the vaccines, it's critical that all players in the healthcare sector continue to work together to strengthen the public's comfort in getting inoculated," says Jerome Thirion, a partner and KPMG's national leader of supply chain management. "Conflicting messages makes full transparency essential for a successful roll out of the country's largest-ever vaccine campaign."

- Eight in 10 Canadians say they would take a COVID-19 vaccine within the next three months if it were offered to them.
-- -- Just over half (53 per cent) of Canadians feel that it's totally safe to get inoculated
-- -- A quarter of Canadians worry that it is not totally safe but are willing to accept the risk and take the shots to get their lives and the economy back on-track
-- -- One in five (22 per cent) say they won't take it due to concerns about vaccine safety and how the rollout will be managed
- To feel safe, Canadians need:
-- -- To trust that the decision to approve a vaccine was based purely on health factors (96 per cent)
-- -- Full transparency on all aspects of the vaccine program (96 per cent)
-- -- Have "clear assurance" that whoever inoculates them – a doctor, nurse or pharmacist – has properly recorded, tracked, and reported potential side effects with public health officials (97 per cent)
- 85 per cent support a national COVID-19 vaccine tracker
- Seven in 10 think it is critical to have a 'made-in-Canada' solution and operations
- Nearly two-thirds (64 per cent) think the Canadian military must be involved to run an effective and efficient rollout of the vaccine program
- 96 per cent want "clear assurance" that their personal records are protected

"The overwhelming majority of Canadians want "clear assurance" that the country has a robust management system in order to trust the process and feel safe taking these new vaccinations," adds Mr. Thirion. "This makes it essential that all the digital systems tracking COVID-19 vaccinations be integrated and aligned to ensure people receive the correct vaccine for their second dose, track adverse reactions and to monitor progress in building immunity to the virus."

The survey finds that Canadians expect the vaccine to be distributed in a manner that minimizes interjurisdictional red tape and tracking systems are in place to ensure multijurisdictional coordination between various levels in the healthcare system.

"There is light in this very dark tunnel. But, Canada is at a critical juncture," says Karina Guy, a partner and KPMG's digital health leader in Western Canada. "For so many Canadians, the last 10 months have been difficult with lives taken and livelihoods lost. Now, Canada has an opportunity to build hope and momentum, supported by transparency and trust."

The top concerns over a COVID-19 vaccine program include:

- Vaccines have been rushed to market without knowing if they are safe (63 per cent);
- The distribution in Canada will be delayed by inter-jurisdictional red tape (46 per cent);
- The same quality / reliability issues with foreign-made vaccines as experienced with foreign-made personal protective equipment (PPE) in phase 1 of the pandemic (45 per cent); and,
- Tracking systems will be inadequate between various levels in the healthcare system leading to an over- or under-supply and an inability to know who has been vaccinated (42 per cent).

When KPMG asked Canadians in May if they would get a COVID-19 vaccination shot when it became available, 83 per cent said they would and an overwhelming majority (94 per cent) said it was their "civic duty as Canadians to flatten the COVID-19 curve", putting public health and safety ahead of the economy.

KPMG surveyed 2,002 Canadians from December 11 to 15, using the AskingCanadians panel by Delvinia through its methodify online research automation platform. The poll is representative to the population, gender and age demographics.